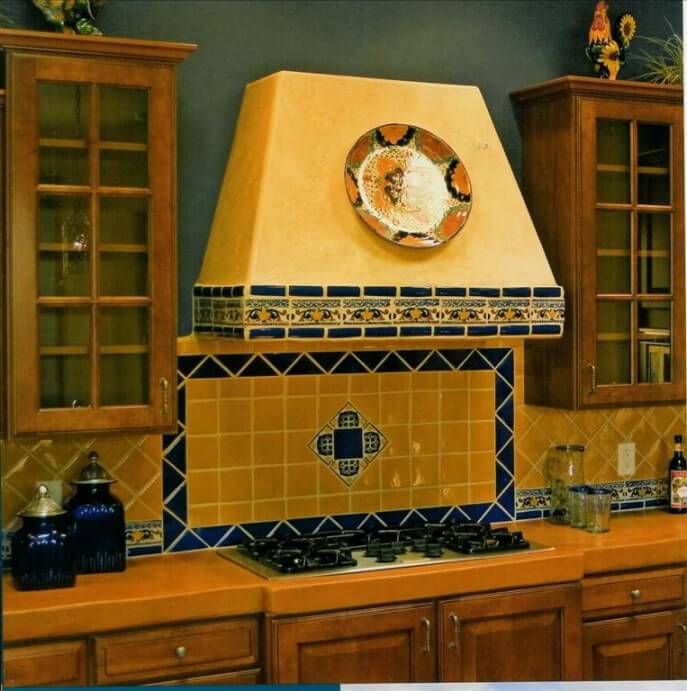 Talavera tile of Puebla, Mexico is a type of majolica pottery, which is distinguished by a milky-white glaze. Authentic Talavera pottery only comes from the city of Puebla and the nearby communities of Atlixco, Cholula, and Tecali, because of the quality of the natural clay found there and the tradition of production which goes back to the 16th century. Much of this ceramic was decorated only in blue, but colors such as yellow, black, green, orange and mauve have also been used. Majolica ceramics were brought to Mexico by the Spanish in the first century of the colonial period. Production of this ceramic became highly developed in Puebla because of the availability of fine clays and the demand for tiles from  the newly established churches and monasteries in the area. The industry had grown sufficiently that by the mid-17th century, standards and guilds had been established which further improved the quality, leading Puebla into what is called the “golden age” of Talavera tile (from 1650 to 1750). Formally, the tradition that developed there is called Talavera Poblana to distinguish it from the similarly named Talavera pottery of Spain. It is a mixture of Italian, Spanish and indigenous ceramic techniques.

The tradition has struggled since the Mexican War of Independence in the early 19th century, during which the number of workshops were less than eight in the state of Puebla. Later efforts by artists and collectors revived the craft somewhat in the early 20th century and there are now significant collections of Talavera pottery in Puebla, Mexico City and  New York City. Further efforts to preserve and promote the craft have occurred in the late 20th century, with the introduction of new, decorative designs and the passage of the Denominación de Origen de la Talavera law to protect authentic, Talavera pieces made with the original, 16th century methods.

Latin Accents, because of concerns over lead content present in the old methods, the desire of the public for more vibrant colors, and the superior durability of modern glazes and bodies, combines the painting talents of artists in Puebla with these modern materials to create a new variation on the centuries old Talavera tile tradition.